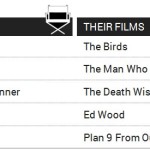 Introduction Apparatus theory began its sprawling sweep in the 70's and pulled its core alpha existence from a few suppositions such as Marxist Film theory and Psychoanalysis. Its manifestations and activities orbits on the techniques of the cameras and its eagle-eye abridging. Apparatus theory circles-in about the cinema and audience connectivity relationship. This theory … END_OF_DOCUMENT_TOKEN_TO_BE_REPLACED