The interaction of human minds with the environment they are surrounded which makes the human change in behavior such systematic study is psychology.

Psychologists believe that films and cinemas that show the moving images on the screen to the people have deeper impact since the perception and the cognitive ability of human minds on seeing the moving image is much higher.

The early researchers and studies made on psychoanalytical studies goes were subjected to experimental research in the fields of imagination, attention, memory and emotions. But the results on the effects of film and cinema were yet to be seen but the contemporary mass media like TVs had a large influence.

Later with research on the impacts of watching certain themes and genres like sci-fi, horrors, thriller created a ripple in the psychological current where the cognitive ability and the knowledge used to analyze the scenes in the brain. This kind of psychological activity that formed the spectator-screen relationship paved way for “psychological film theory.” 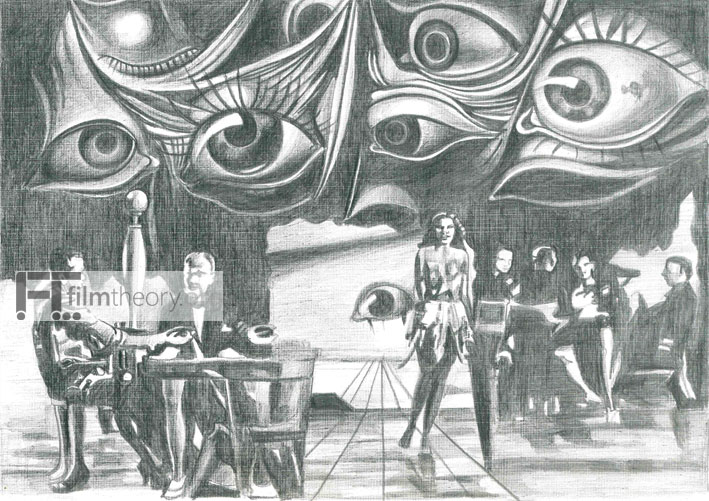 A method to investigate the mystery behind the thoughts and unconscious activity in the human mind can be analyzed through psychology. This thought process is associated with film studies to make psychoanalysis on films.

These two theories put forth the development in the film theories like feminist film theory.

Sigmund Freud’s approach of psychoanalytic theory starts by understanding the human psyche that strives to fulfill the needs and desires or drown to self pity and self disgust due to the guilt. These types of feelings that are buried deep in the subconscious mind of a human resurfaces unconsciously as projections called as dreams.

Freud defined that these two types of ego as the realist and narcissist. One can define narcissist commonly as the person who is excessively self-centered or in other words love with themselves. But, in terms of psychology, a narcissist means that person is affiliated with the erotic attributes, selfishness, impulsive and in love of mirrors. Here, it is taken as condition normal for the personality development in the initial stages of childhood. The desire seeking is the Id, and the seeking is to means to desire is the reality. Ego works on satisfying the desires sought by Id and narcissistic ego desiring a mirrored object; since ego is linked to the beginning stage of narcissistic ego. Freud pointed out that ego’s relationship is not reality but in acquiring the pleasure of fulfilling the desires. The realist ego is the mediator between Id and reality where the narcissist has no such connection with reality.

Freudian theory of psychoanalysis brings in the Oedipal Crisis. Oedipal crisis can simply be put as psychological disorder where the person has sexual desire for the parent of opposite sex. Freud says that such kind of involvements happens with children of age between 3 to 5. This kind of desire can be repressed when the parent of the same sex as the child identifies it and helps the child passes through the stage without making it a traumatic experience rather in a loving relationship of parent and child, he gives an example of male child’s affiliation to his mother. It is known that Sigmund Freud used sexual desires and needs in this theory as a primal explanation. Oedipal Crisis talks about the repression of the male child’s unconscious sexual drive and the imaginary unity with the child’s mother he points out that these types of desires from the narcissist union from the mother is repressed and must repudiate her to attain stability until he finds his own female.

The theory goes on with explanation of a person dividing self into ideal and false self to bring unity.  And the key points to be remembered in the psychoanalysis on film theory are

And the order of subjectivity

Adapted from the 1964 novel by Roald Dahl entitled Charlie and the Chocolate Factory, this musical cinematic motion picture was directed by Mel Stuart and released on June 30, 1971 with Gene Wilder portraying the title role as Willy Wonka. This movie conveys the tale about a boy named Charlie Bucket, as portrayed by Peter Ostrum, when he luckily given a Golden Ticket that grants him an opportunity to pay a visit to the chocolate mill of Willy Wonka along with four other kids from random places of the globe. The movie was subjected with favorable appraisals yet in theater establishments it turned out to be a letdown, still, it has become a cult film because of its recurrent television airtime and domestic recreation vending. It was in the following year from its movie release that the movie was presented with an Oscar Award nomination for Best Original Score. The lead actor also was nominated as Best Actor in Motion Picture Musical or Comedy category at the Golden Globe, however, the same was overpowered by its “Fiddler on the Roof” contender. This psychological film is about feeding and satisfying the cravings and fantasy of a kid over a chocolate and how his universe was completely encompassed by such fancy.